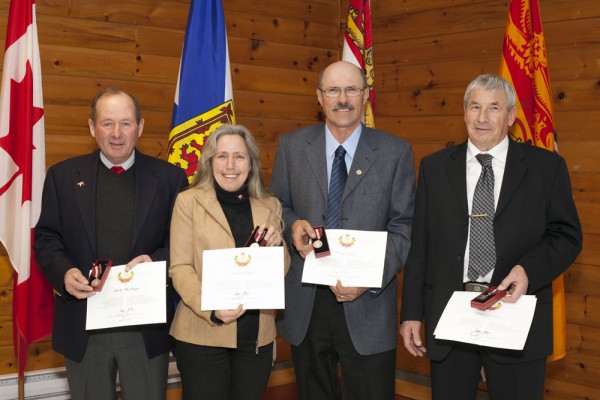 On Thursday, February 14, 2013 more than fifty people gathered to celebrate the presentation of the Queen’s Diamond Jubilee Medal to four well deserving Maritime beef producers.  Recipients were commended for their invaluable contributions to the Beef Industry.  They include Darlene Sanford, from Mont Carmel, PEI;  Henry Knight from Lower Jemseg, NB;  Robert Acton, from  Cookville, NB;  and Charlie MacKenzie, Antigonish, NS. The event was hosted by the Maritime Beef Council (MBC) in Nappan, Nova Scotia.  MBC Chair, Jennifer MacDonald welcomed everyone and introduced the recipients. Dave Solverson, Vice-President of CCA, travelled to Nappan from Alberta to present the medals.

Darlene Sanford is well known for her strong leadership as Chair of the PEI Cattle Producers.  Her eight year tenure was one of tremendous opportunities and challenges. She was at the helm when the BSE crisis hit the beef industry. She worked and lobbied tirelessly with government and producer groups to alleviate the effects of the BSE crisis. She was involved in the creation of the Atlantic Tender Beef Classic brand, and was a founding member of the PEI Beef Producers Coop, which represented shareholders of the Atlantic Beef Products processing facility.  In 2005, Darlene was awarded the PEI Women’s Institute’s Women in Agriculture Recognition Award, and in 2009 Farm Credit Canada’s Rose Mary Davis Award. Darlene along with her husband Mitchell and children Marina and Brenton currently operate a feedlot along the south shore of Prince Edward Island.

Henry Knight and his wife Nancy Perry have two daughters, Carrie and Holly. Henry was a founding member of the South East Herford Club, serving as President on two occasions. Henry was also a 4-H leader for their local beef club for seven years.  Numerous organizations benefited from Henry’s tireless efforts to improve the beef industry in NB. He served as Director or Chair of; the livestock committee for the Queens County Fair, the NB Herford Association, the NB Cattle Producers and the MBC. He continues to be very involved within the beef industry and his community.

Robert Acton has been President of the NB Federation of Agriculture and the NB Cattle Producers Association. He has served on the Board of Directors of the Canadian Federation of Agriculture and the Canadian Cattleman’s Association. He was the 1995 recipient of the “Louis Hebert Award” by the NB Institute of Agrologists in recognition of his outstanding achievement as a farmer. In 1983 he received “Person of the Year” award from the Farm & Forest Magazine for his achievement and dedication to agriculture in Atlantic Canada. He continues to farm with his family and is especially proud to have two of his Grandsons involved in the farm. Robert credits his deceased wife Alma and their three daughters, Debbie, Donna and Darlene for enabling him to become so involved in the industry.

Charlie MacKenzie and his wife Anne have two daughters, Anne Marie and Maureen. Charlie has served on the NS Cattle Producers Board for more than twelve years and was president for two terms with the board. During this time Charlie also represented NS on the Canadian Cattlemen’s Association. He joined the Beef Cattle Research Council in 2001 and served there until the present. In addition to his dedication and lifelong service to the Maritime Beef Industry, Charlie also served his community. For 23 years he was a member of the Board of Directors for the Farmers Mutual Insurance Company, and continues to serve as a Director on the Eastern Nova Scotia Exhibition.

Following the presentation, each recipient acknowledged their families for making it possible for them to volunteer their time and energy off the farm.  Mr. Solverson said he was honoured to have been invited to present the awards to such well deserving individuals.  In closing Ms MacDonald said “each one of you has demonstrated your passion for this industry and your willingness to share what you have learned with the next generation. We are extremely pleased to be able to reward you for your efforts here today.”